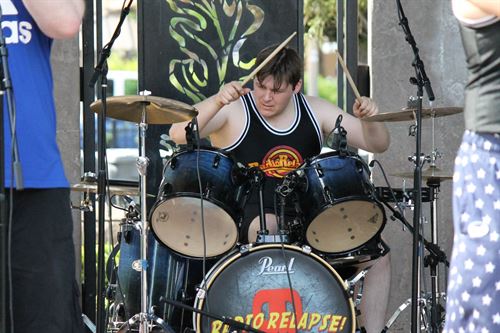 For the last 10 years, I have been an active musician in the greater Chico area. I picked up my first pair of sticks at 10 years old and starting playing on a full drum set in 6th grade. As a teen, I became involved with the music scene around Orland, CA, going to shows every weekend at the all-ages, family-friendly Soda Shop. Inspired by other musician friends, I started my first rock band with some friends in 2007 at 17, and never looked back.

In November 2015, I purchased Chico Rockstars: School of Music, where we provided music lessons, practice space, recording, musical theater, and a variety of other services catered towards musicians of all ages and skill levels. Before this, I worked as a drum instructor at Guitar Center.

Some highlights of my music career include:

My approach to teaching is to base the lesson around the student, starting with what music they like and want to play. I like to mix technique and music theory with fun right from the beginning so my students get playing quickly but know their stuff if given sheet music. My goal to get students comfortable behind a kit, playing in bands, and performing for the public. You know… the fun part!

I have experience playing drums and percussion for a variety of music genres, including but not limited to: modern/hard rock, punk, alternative, metal, progressive music, indie, classic rock, and a little bit of reggae, blues, folk, Celtic, and jazz. No matter what someone likes to play or wants to learn, we can make it happen.

I hope you will consider me as a music instructor. Thank you!